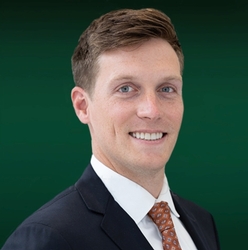 Having recently moved back to the Chicagoland area after almost a decade away, Tom French has joined Chuhak & Tecson as an associate in both the Litigation and Employment practice groups. Tom focuses his practice on complex civil litigation, with an emphasis on commercial matters, particularly those involving the healthcare industry. He has gained significant experience representing clients in a variety of consequential disputes, including the following:


Tom has received praise from clients for the thoroughness of his strategic advice and for his responsiveness to their needs.

As dedicated as he is to serving his clients, Tom is committed to giving back to the community through pro bono work. He was formerly involved in the Legal Aid Society of Louisville, Kentucky, where, as an associate in a highly-regarded Louisville firm, he represented victims of domestic violence.

Tom is an avid swimmer and enjoys spending time competing with the masters club, Chicago Swedish Fish. Tom and his wife also enjoy exploring Chicago's food scene and rooting for (but not always enjoying) the Chicago Bears.