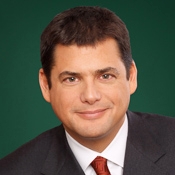 For more than 30 years Joshua Hyman has provided banks and commercial finance companies, including both national institutions and locally based lenders, with results-oriented, efficient and highly responsive representation in a broad range of matters, including structuring loan transactions, negotiating, and drafting loan and collateral documents for conventional and SBA loans. He also advises lenders and other secured creditors in bankruptcy proceedings, workouts and other creditors' rights matters, as well as representing them in lender liability suits.

Josh founded Chuhak & Tecson’s Banking Group in 2002 and steered the growth of this practice area—from one attorney who served a few banks to now 27 attorneys who service over 100 banks and financial institutions. Stepping down as practice group leader in 2016, he moved into an advisory role while continuing as a principal.

With 2017, Josh has moved into a new role as special counsel and continues to serve clients while sharing his time between Chicago and New York, representing clients in both jurisdictions.

For 15 years—while he was building the Banking practice—Josh actively mentored the next generation of Chuhak attorneys and continues to do so. Business development programs he launched several years ago to coach attorneys in early- to mid-career stages have since advanced to a program that serves attorneys throughout the firm. He is uniquely adept at helping attorneys recognize their achievements—from minor to major—which inspire them to be creative in their solutions with clients.

As past chair of the Associate Liaison Committee, he takes a special interest in mentoring associates by ensuring that they become skilled at both client relations and constructing and implementing their own business development plans. In addition, Josh has previously served on the firm's Management, Compensation and Marketing Committees, and was member of the Diversity and Inclusion Council. This breadth of experience, his dedication to succession planning, and his continued role as a mentor assures that the Banking practice will remain a premier service in both Chicago and New York.

He co-authored the 2013 and 2016 supplement "Income Tax Consequences," Mortgage Foreclosure, published by the Illinois Institute of Continuing Legal Education. Josh was previously a shareholder with the firm of Fumagalli, Tecson & Hyman, Ltd.

An active member of the community, Josh has sponsored a variety of not for profit and charitable causes and organizations, including: