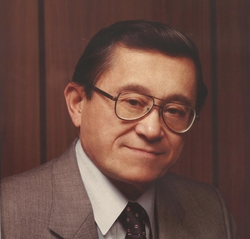 Joseph A. Tecson passed away peacefully at home in Riverside on Sunday, January 11, 2015. Joe and Caroline celebrated 60 years of marriage, and his good humor, wisdom and support were a blessing to his children, grandchildren and great grandchild. He shared his zest for life and values with his family, many governmental and charitable institutions, and Chuhak & Tecson, P.C. where he headed the Governmental and Healthcare Practices of the firm.

Joe was a founding member of Chuhak & Tecson and helped imbue the firm with its reputation for responsive service, integrity, hard work, unsurpassed quality and civility. He combined a sense of decorum with a sense of humor, which garnered respect throughout the many institutions that he helped lead. He always enjoyed telling a funny story, was a great poker player and had an amazing political sense. Joe served in the Navy as a radioman in airplanes that were on the aircraft carrier USS Shangri-La, and he gave back to his county, region and state through an extraordinary career of public service. He served in the Constitutional Convention which created an entirely new constitution for Illinois that continues in effect today. Other delegates included Richard M. Daley and Michael Madigan, and he was appointed to chair the committee which drafted the executive article of the Constitution. He served as a member of the Cook County Board for five years, and was the first Asian-American on that board. During that time, Joe served on the committee that oversaw Cook County Hospital. He also served for many years on the Board of Directors of Brookfield Zoo, and was one of the greatest proponents of the Zoo’s continual upgrades and addition of new exhibits.

As a recognized governmental and healthcare attorney, he served on the Board of Directors of MacNeal Hospital and helped lead the complete turnaround of that institution through the construction of a new replacement hospital. He was frequently asked to serve as special counsel to various government agencies, including the Illinois Department of Insurance, the Medical Disciplinary Board, the Department of Public Aid, the Department of Public Health and the Department of Professional Regulation. Joe also served on the boards of two banks and was the municipal attorney for the Village of North Riverside and an arbitrator for the American Arbitration Association.