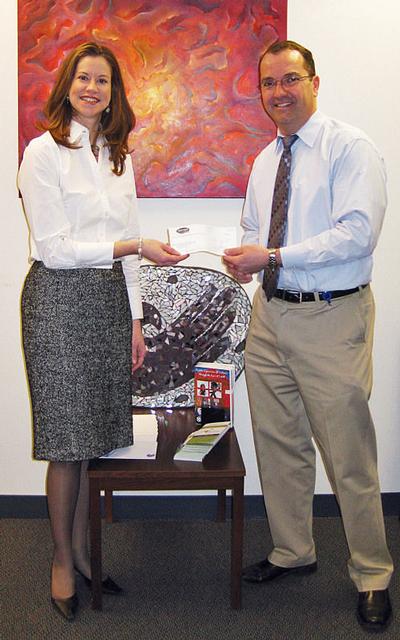 Chicago Metropolitan Battered Women's Network received a windfall this quarter from Garvey's Office Products, thanks to the networking efforts of a surprise third party.

Dan Garvey, sales manager at the family-owned office supplies store, presented Dawn Dalton, executive director of CMBWN, with a check for $2100.65. The money was raised through Garvey's toner recycling program, Recycle for a Reason, which has provided more than $50,000 for local charities over the past four years.

It was Darius Rogers, office services supervisor at Chuhak & Tecson, P.C., a Chicago law firm, who pointed Garvey to CMBWN on behalf of an initiative called Women Helping Women—and Rogers, of course, isn't even a member.

An after-hours networking group launched in 2009 by the women attorneys at Chuhak & Tecson, Women Helping Women hosts Mix-and-Mingle events twice a year. The mixers are designed to offer women entrepreneurs and decision makers the unique opportunity to accomplish business development and community service at the same time.

Last May's event benefited CMBWN, an umbrella organization of more than 100 domestic violence agencies, affiliates and individuals working to improve the lives of battered women, their children and others impacted by domestic violence.

“We're able to provide our member agencies with centralized resources, training, advocacy and a helpline so they can focus on fulfilling their mission of providing direct services to the client,” Dalton said.

The professional women who attended the May event assembled necessity bags for CMBWN to distribute at battered women's shelters across Chicago. Thousands of items were donated for women and children to use, including personal hygiene products provided by Garvey's at the invitation of Darius Rogers.

Rogers also was familiar with Recycle for a Reason and suggested that CMBWN would be a worthy recipient, Garvey said. When customers return empty toner cartridges to Garvey's, the company sells them to a recycling center and donates the quarterly profits from this program to a non-profit organization.

“Our company is succeeding based on our relationships with the businesses in this community,” Garvey said. “This is a good way to give back to the community that's supporting us.”

Community outreach also is important to Chuhak & Tecson, and its Women Helping Women has assisted at least 300 women and 200 children. Besides the CMBWN necessity bags, the group also collected new clothing and accessories for struggling women served by Bottomless Closet and more than $1,000 in cash and gift cards for Between Friends, which helps domestic violence victims and their children.

“As successful members of the community, we have a responsibility to help those less fortunate and make meaningful contributions to public service,” said Lindsey Paige Markus, associate at Chuhak & Tecson. “It's wonderful to pool our energy and resources together. The Women Helping Women events extend beyond the female attorneys at the firm to all employees, both men and women.”

Rogers' influence in achieving new donations for CMBWN “underscores how employees throughout the firm work together,” Markus said. “The cross-fertilization of ideas creates opportunities for increased production. It is how we practice law and how we give back to the community.”

Dalton said the Garvey's gift will be added to the organization's general operating fund, “which is always the most difficult thing to support.” She said CMBWN, like many other non-profit organizations, is facing the real prospect of budget cuts from its biggest funder, the State of Illinois.

“Everybody's really scrambling and trying to think out of the box and allow the mission to be achieved,” Dalton said. “This is a significant donation because it was unexpected. When you get a gift of over $2,000, it allows you to worry a little less.

“Not only is a donation like this helpful, but it also helps you remember that there is a community out there that wants to support you."