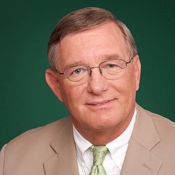 As a pilot and former Navy jet mechanic, Bill DeYoung possesses intricate knowledge of aircraft and the aviation industry that gives him a leg up when litigating aviation cases.

William DeYoung is a litigator who focuses his practice in aviation, products liability and insurance coverage. He currently leads the firm's Aviation Litigation & Transactions practice group.

In addition to his aviation practice, Bill represents clients in the consumer home, medical, industrial and automotive industries in products liability matters.

Bill represents clients in litigation throughout the United States in both the State and Federal courts. He tries cases in both venues and handles state and federal appeals.

While Bill has defended his clients in an extraordinary number of trials in both the Circuit Court of Cook County and the U.S. District Court for the Northern District of Illinois, he has also represented his clients in aviation litigation throughout the United States.

In addition to serving as former leader of the Aviation practice group, Bill has been a repeated member of Chuhak & Tecson's Compensation and Management Committees.

Bill has been a pilot for 45 years, served aboard the U.S.S. America while in the Navy, and is currently an ATP and CFI-AI-MEI. He has flown his Cessna 421B for 25 years.